In one of those Nintendo eShop sales — thanks, Christmas! — I grabbed a non-JRPG title. It’s a racing game, Need for Speed: Hot Pursuit Remastered. But why?

Besides being a super deal, I was thinking of my oldest son; he loves exotic cars, especially Lamborghinis. Of course! I do like a good racing game myself and enjoyed the original Need for Speed by Road & Track waaaay back in the 90s on PS1. So I bought two copies — it was less than $10 each — one for each of our Switches.

Oh wow I love this game!

I’ve been enjoying this Need for Speed game a lot. Honestly, I’m surprised by how nice this racing game is. I full-on smile ear to ear when playing it. My face makes many expressions of focus, grit, thrill — I even yell in glee!

The overall game is simple. Pick a track, pick a car, and race. UI and presentation are no frills yet elegant and stylized; it’s not cluttered or over-stylized. By contrast, another racing game I had fun with, Asphalt Legends 9, is busier and more complex in just its interface. AL9 is also laden with gacha mechanics, where you can pay to win, buying cars and such. Thumbs down on that. I like my old-school simple race games. I pay for the whole game; now let me just play it all.

I like the fun of arcade-style racers, but I don’t like how silly they can sometimes be. Years ago, I played games like Daytona USA and Cruis’n Exotica, the latter of which was a bit too simple and unsophisticated. But Need for Speed strikes a great balance of both arcade racing and racing simulator. I think games like Gran Turismo or Forza Motorsport might be too sophisticated for my taste, though the realism is part of what I like.

Let me also add that Mario Kart 8 Deluxe is in a league of its own — local kart-racing is another kind of fun. 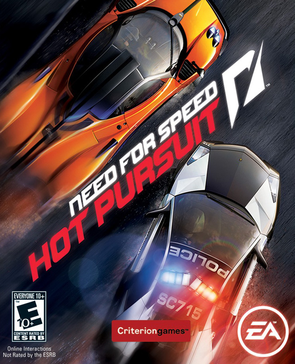 Another aspect that makes Need for Speed so great are its tracks. I love that they’re set in a realistic world and are point A to B rather than closed circuits that get repetitive. Part of the realism is the beautiful scenery and landscapes which, though running on weak Switch hardware, are nonetheless detailed in HD with clean textures and pleasing light effects like reflections. The day/night cycle is also very well done.

The gameplay itself is most enthralling. Gas’n go, feather-touch the brakes in corners to break loose those tires and drift, counter-steer, and blast nitrous to push out of turns and accelerate on the straights. Avoid collisions, outrun cops, slipstream and bump rival cars…it all adds up to serious fun!

Speaking of the cars, wow, love their looks, the licensed brands and models; I’m of course aiming for Lambos. The Countach is within reach now!

For me, Need for Speed Hot Pursuit Remastered is serving as a great game to play between my Xenoblade Chronicles sessions. One moment I’m in an epic JRPG, immersed in a fantasy story. The next I’m in a sports car, engaged in fantastic racing.

What are you playing lately?