This new book by Aidan Moher was an instant purchase for me! I read a few words of the synopsis and skimmed a couple reviews and — boom! — I clicked Buy Now and sent it directly to my Kindle in a flash. It’s said to be “unputdownable” for someone who likes JRPGs and grew up playing them in the 90’s. Oh yeah. Pause game…read book…resume game.

The book was just released this October. I discovered it in November — thanks to the Thirsty Mage — and started reading it in December. I’m about 20% through it already.

So far, I’m really enjoying this good read. It is written with a lot of detailed history about how JRPGs came to be and arrived in the west. Sprinkled throughout are personal anecdotes or commentary about the state of JRPG gaming at different stages, such as the 80bit NES days. There are also info boxes here and there with specific game info.

The writing itself is done well. My kindle ebook has had zero errors thus far; links and formatting function correctly. 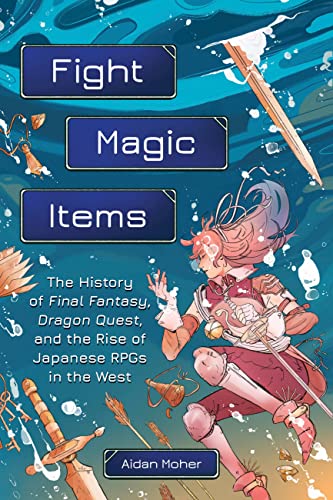 Here is an early quote:

“Fight, Magic, Items is the story of how JRPGs brought a genre to the masses and reached meteoric success thanks to some of the most brilliant and bold creators in gaming history.” — Aidan Moher

In particular, I’ve been really appreciating learning about the writers, artists, and developers who first pioneered JRPGs for the Nintendo in the late 80’s. Their talent and ambition was vital to success and I’m thankful it all came together against the odds at times.

One of the things I always look for in a published work on JRPGs is how it defines the genre; it can be hard to pin down. Likewise, I also look to see how it views Zelda games. In other words, is Zelda an RPG?

“Whether The Legend of Zelda and its sequels are JRPGs or not is hotly contested by fans, yet no one can deny its adventurous and far-reaching impact on the genre thanks to its highly explorable world, puzzle-based dungeons, and sword-and-sorcery setting.” — Aidan Moher

I’ve only ready through the very early days of video role-laying games up to the release times of Dragon Quest III and Final Fantasy III, as well as Phantasy Star and Mother.

If you really like to geek out with JRPGs, I’d already say this book is a must-read; go pick it up now. Though it’s hard to put down a controller sometimes, good books like this are also hard to put down.

Like the JRPGs of this book, it always comes down to a good story, which everybody loves. Fight, Magic, Items is the story of playable video game stories!

Are you interested in this book? Is there another book you’re reading or looking forward to?