Done! I finished reading Fight Magic Items and gave it 5 out of 5 stars on Goodreads. Bottom line: if you like JRPGs, it’s a must-read. Pause your game on occasion and grind out some of the pages; it’ll be worth your time. Let me share why and also sprinkle some of my favorite quotes throughout.

The story — history — of how JRPGs were born, matured, and thrive today is closely recounted in detail from cover to cover. It focuses on the inception and influences of the Dragon Quest and Final Fantasy series and how they individually and collectively gave life to the JRPG genre gamers now enjoy, like Hironobu Sakaguchi’s (Mistwalker) recent Fantasian on Apple Arcade.

“Fight, Magic, Items is the story of how JRPGs brought a genre to the masses and reached meteoric success thanks to some of the most brilliant and bold creators in gaming history.”

If you’ve never played one of these series titles but you have enjoyed other JRPGs, you may still find Fight Magic Items to be an intriguing account of how such cool games came to life. But if, like me, you grew up in the “Golden Age” with Final Fantasy III (FFVI) on the SNES, for example, then you’re in for a real treat. 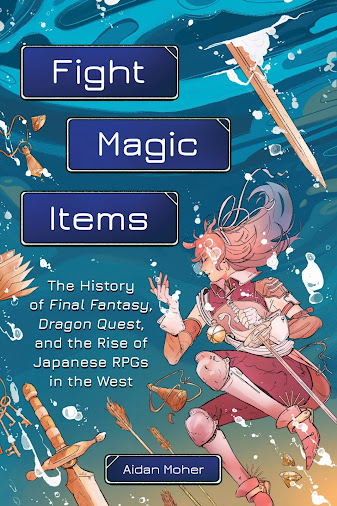 The telling begins all the way back with the first table-top role playing games like Dungeons and Dragons — you may have heard of that one — and how such western TTRPGs sparked the imaginations of game developers — nay, creators — in Japan to bring forth Dragon Quest and the like.

“Whether The Legend of Zelda and its sequels are JRPGs or not is hotly contested by fans, yet no one can deny its adventurous and far-reaching impact on the genre thanks to its highly explorable world, puzzle-based dungeons, and sword-and-sorcery setting.”

Fight Magic Items also details JRPGs outside of the DQ and FF franchises, so not to worry. Star Ocean and many more are all onboard: Super Mario RPG, Xenogears, Tales of… They're woven through the history, with several given special text block call-outs.

The book follows a basic JRPG timeline throughout the 80’s to the present that coincides with each gaming generation: 8-bit (NES, Sega Master System), 16-bit (SNES, Genesis), 32-bit (PS1, Dreamcast), 64-bit (N64), and onward. It also includes, of course, handheld consoles and titles.

“If you grab a random sample of Final Fantasy fans, chances are they’d name one of Final Fantasy VI, VII, or X as the series best. And I’d bet my complete-in-box copy of Chrono Trigger that their answer is also the first Final Fantasy game they really fell in love with.”

I was personally very interested to fill in the missing gaps in my own gaming history as I, like author Aidan Moher, was at times sidelined from gaming by adulting and related life events. And I didn’t own every gaming console, so I missed out on many great JRPGs.

My favorite part of the book was where I learned about the “Dark Age” of JRPGs when developers struggled to transition to the HD level on PS3 and Xbox 360. I learned specific details and general factors that directly hindered JRPG development, and it all made sense. It so happens that during this time, I didn’t play video games at all, not even the Wii (that’s why I’m just now playing Xenoblade Chronicles for the first time). So this section of the book greatly informed me.

“...the rising popularity of handheld consoles provided JRPG creators an affordable and increasingly legitimate alternative to the high-priced consoles.”

So Fight Magic Items is very informative. It’s also fascinating and spurs nostalgia for a reader in my situation. The JRPG historical timeline is presented in a storytelling and structured manner, with the dots connected and highlighted between each point along the way. It utilizes interviews from those in the gaming industry and previously published references.

“The Xbox 360 and PlayStation 3 era was, in one way, a dark age for traditional home console JRPGs. However, there was a light in the darkness, and you could hold it right in the palm of your hand.”

While the content is detailed and historical, it’s not presented matter-of-factly as a rote academic paper. Instead, it’s shared with care and high esteem. About JRPGs, it’s not like asking, “How did this happen?” It’s like wondering, “How’d we get so lucky?”

“Many of these indie projects are finding success on Nintendo’s Switch console, with the hybrid handheld–big-screen console quickly establishing itself as a go-to platform for retro-inspired indie games.”

If you consider yourself lucky to enjoy JRPGs, then you’ll surely enjoy Fight Magic Items. A suggestion: use this book as your “palate cleanser” between epic JRPG playthroughs.

Have you read this book? What’dya think?