Sweet victory! I finally finished Bravely Default II this past weekend, rolling credits at nearly 79 hours of playtime. And by default, I’ll brave some thoughts — I use the term ‘review’ loosely.

Upon beating the final boss, my immediate reaction was, “Wait, what!?” That was followed by, “That’s it? There must be a concluding sequel.” I held my breath before releasing a victory shout, “Um, so was that the penultimate boss? Am I about to get decimated by an insanely-hard nemesis?”

I had one final boss to fight, which essentially…well…I’ll avoid spoilers. What I was expecting and hoping for, after almost 80 hours of gameplay, was more denouement. I thought the characters’ personal stories would be wrapped up a bit more to say the least. But because they weren’t, I thought I’d see the words, “To be concluded…”

Having said that, the story overall was good. Compared to Octopath Traveler, BDII featured a cohesive overarching narrative, singular to all the characters in the game. This is what a good long JRPG does; it tells a story rather than telling a group of separate but kind of overlapping mini-stories.

For this reason alone, Bravely Default II edges out above Octopath Traveler in my personal Top Ten JRPGs ranking.

Both Octopath and BDII get very high marks for presentation (visual, aural) and gameplay (combat, level progression, character customization). But story is where BDII outshines Octopath. Sure, the narrative may seem only serviceable to many players, but I appreciated its relative simplicity and that it avoids the typical convoluted mess JRPGs are infamous for.

Crystals? Yes. All the crystals, please. 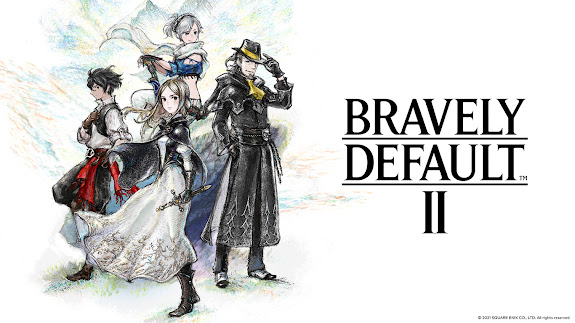 Bravely Default II is a spiritual cousin to classics like my #1 favorite, Final Fantasy VI. Likewise similar to Octopath Traveler, BDII is a classic turn-based JRPG featuring an overworld that connects towns and dungeons between which you travel.

Want to learn new abilities and gain XP? Go fight monsters and then fight some more. Increase encounter rate and enable progression boosts at will. For BDII, when I wanted to just grind away, I’d always equip “JP Up” and “JP Up and Up” together for job point multipliers. This game was made to grind!

If you dislike grinding, I don’t recommend this game.

Winning new jobs with new abilities to unlock is tantalizing and fulfilling throughout the game. Having so many options at your disposal is empowering. It’s like a kid in a JRPG candy store who is suddenly handed a wad of cash; enjoy! There are more than enough job abilities to satisfy every type of player, so you can experiment with many different setups, which you’ll need to do. New bosses bring unique combat, forcing players to think about their strategy.

Besides abilities, you’ll need to consider what weapons, armor, and items to equip, giving you the advantage over the enemy. In addition to that, BDII forces you to think about how or when to use your Brave points and when to Default. The whole system is robust enough that I know I didn’t experience it totally, though I certainly relished a satisfying amount.

For example, I’d still like to try a party setup that leans on heavy buff/debuff combos with the Bard and Pictomancer jobs. I stuck mostly to a standard load out of DPS, tank, healer/supporters. My main jobs were Shieldmaster, Swordmaster, Spiritmaster, and Red Mage.

There are so many combos you could try. Here’s one possibility: mastering four Red Mages and four Spiritmasters, then defaulting your party to the max, you can cast 32 Holy spells in a single round thanks to the Red Mage’s Chainspell ability!

So Bravely Default II’s gameplay is, I think, its best trait. The story is adequate for the Job(s) (see what I did there?) And its presentation suits my tastes with top-notch polish and spell effects especially showcasing exquisite particle detail.

If you like turn-based JRPGs at all, then BDII should be a must-play game on your list.

Have you played Bravely Default II or do you plan to? What’s your favorite turn-based JRPG?