One of the greatest JRPGs to grace gamers in modern times is Xenoblade Chronicles. The definitive edition on Nintendo Switch was on my backlog. Now, I’ve finally — FINALLY — started on this adventure. It’s my first playthrough and, so far, I love it!

Coming right from both Octopath Traveler and Bravely Default II, two lovely classic turn-based JRPGs, Xenoblade’s combat requires adjustment. That said, I’m taking to it quite well and really enjoying it. There seems to be much in the way of battle mechanics to learn, but I’m finding the game gives you plenty of tutorials, time, and monsters to practice your party’s fighting skills.

One of the coolest things about Xenoblade is how world exploration flows into and out of combat. Each area, whether an expansive field or an enclosed cave, is teeming with baddies, living and breathing on the land. They’re part of the ecosystem it seems, and while exploring the game world’s massive environs, players can easily enter into combat at will.

Engaging enemies is straightforward, and once defeated, players simply continue on the journey. There are no special battle screens or transitions between world travel mode and fighting mode. On-screen menus or overlays may change, but the 3D terrain, party members, and creatures all persist.

I expected Xenoblade to be great, and it’s proving to be more than that already. It’s seriously awesome. It gives me a feeling of adventure and immerses me unlike many other games. It feels like the wonder I first felt with Final Fantasy VI or, decades later, Breath of the Wild. It’s special indeed. 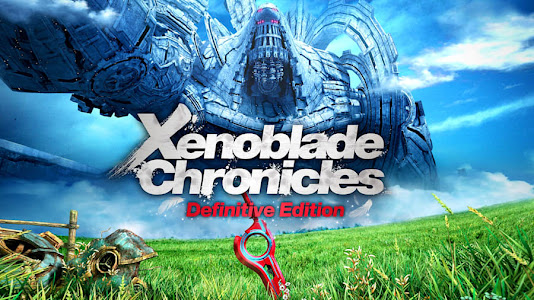 While I’m only about 10 hours into the game at Chapter 4, I can say the battle system, world design, exploration, items, progression systems, and music are splendid. But the story, the storytelling, and the characters — including voice acting — rise above all that. I like to say that JRPGs stand on the three pillars of presentation, gameplay, and story, with the narrative aspect being paramount. Xenoblade looks to have nailed it all so far.

The only other game I compare XC:DE to at the moment is Xenoblade Chronicles X on the Wii U, in which I played a bit over 40 hours. It’s an eye-popping and breathtakingly expansive open-world JRPG, with exploration possibly exceeding even that of the first Xenoblade I’m now enjoying. But without doubt, the party setup, characters, and driving story of XC far surpasses that of XCX.

Come to think of it, despite my love of the graphics and gameplay of both XCX and Octopath Traveler, those two otherwise great JRPGs buckle at the knees due to weak story or storytelling when compared to XC and Bravely Default II.

Suffice to say, I’m loving the greatness of XC so far and am thrilled to finally be immersed in it. And while I want to savor its adventure to the full, I’m also pushing steadily towards the newest series entry Xenoblade Chronicles 3. It has received impressive accolades, it is nominated for Game of the Year, and it’s on my backlog.

What do you think of Xenoblade?