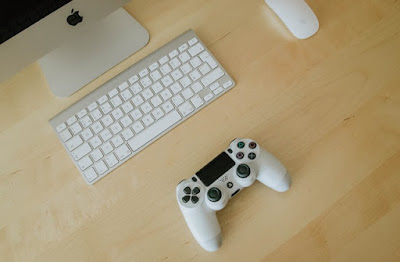 This week I happened upon a YouTube video covering rumors or leaks about a potential new device from Apple that’s focused on playing games. The company may be developing its own hybrid handheld game console similar to the Nintendo Switch. What!?

I don't think Apple makes new devices without serious consideration. When it does, it typically introduces a hit product. But not every device Apple makes (HomePod, for example) sees success. So while I’d be one of the first to get excited for a shiny new Apple gadget, the big question is, can Apple seriously enter the gaming industry and compete with Sony, Microsoft, and Nintendo? And if it did, how would its success be measured?
There’s precedent. Microsoft, the Windows and Office company, launched the Xbox long ago, which has mostly thrived, albeit the market it released in was different back then. Likewise, Apple, once solely a computer company, pivoted to a mobile devices company and later added services.
Consider that Apple recently entered the TV/Movie industry to stream videos among established rivals like Netflix, and it appears successful so far. If Apple's resolve is serious, it has the talent and the capital to pull off a gaming device…by the numbers.
Besides engineering and financing power, it also has a powerful brand, one that's aspirational, popular, and trusted for quality and privacy. With that, Apple has clout and connections in the entertainment industry with Apple Music, Beats, and Apple TV+.
But is all that enough? What about developing or publishing triple-A titles exclusive to its platform? How would it leverage Apple Arcade? Would there be an Apple Arcade "Pro" or "Plus" tier that costs more to allow ‘AAA’ games?

Before answering games and software questions, though, for gamers to take Apple seriously, there’s one clear sign the company would have to display at the outset: buttons.

I’m talking about real, physical, tactile, buttons like those found on most game controllers. While Apple has often eschewed buttons, it would need to think different. There are two things gamers don’t want:


A leading example, Nintendo is known for innovating game controls, and even when it fully moved to motion controls on the Wii, the unique controllers retained physical buttons.

I can imagine a future with Apple being among the other big three companies, publishing (but not likely developing) exclusive major console titles. I can also imagine Apple making a Switch-like game machine (an expensive one for sure) with excellent CPU and GPU performance using a variant of its already stellar M1 line of chips — I’d say make them the “G” series for gaming and GPU focus.


There’s much to consider with Apple possibly entering the gaming market. Apple would hopefully think of new ways to “solve gaming” unlike what’s been done before. I have more questions than answers overall. But that said, if Apple makes something like a “GamePod,” I’d be sorely tempted to buy it on launch day.
(Photo by Barbora Dostálová on Unsplash)
Topics: Gaming
Newer Post Older Post Home