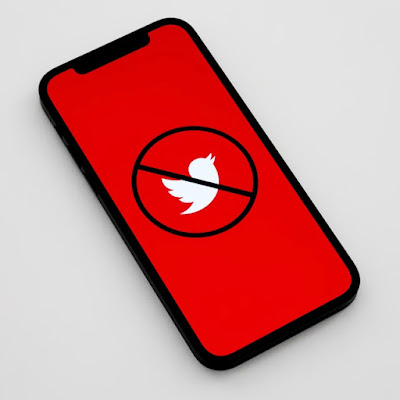 Among social media sites, I had kept my second Twitter account since 2012. I had one before that, started circa 2009, but I trashed it at some point when I nuked all social media from orbit.

Why I kept my long-running Twitter account over the years, despite deleting other social media, was for various reasons.

Since the ills of Twitter are pretty much common knowledge, I don't need to detail them here. I'll just throw out some typical terms associated with the platform: vitriol, dumpster fire, doom-scrolling, and virtue-signaling. The more I used Twitter in recent months, the more I experienced these negatives.

There are, of course, other issues with the service. I talked about some of my personal problems with Twitter, like addiction, in recent posts here and here.

So I logged off Twitter and waited a week or so. Absent the clamor or random tweets, my brain began to feel calm. Then Elon Musk bought (or is buying) Twitter, which...who knows!? So I decided it was time to delete it altogether and put it behind me. I don't want to get drawn back into the so-called Twitter "hellscape."

I think our minds and attention are made worse by social media, due to both its content (misinformation, disinformation, distraction, outrage, polarization, tribalism...) and its form (short, viral, out-of-context, inflammatory, emotional, sensational, hyperbolic headlines...). I also think the mass scale of aggregated users in social media environments amplifies human misbehavior and hurts civility and democracy.

I agree with the notion that social media can have some benefits and positives. But I think the negatives outweigh those, and I think know that people can connect, communicate, and have conversation without social media. In fact, we can have these things better without ad-revenue-based algorithms that manipulate us, both individually and collectively.

(Photo by Jeremy Bezanger on Unsplash)