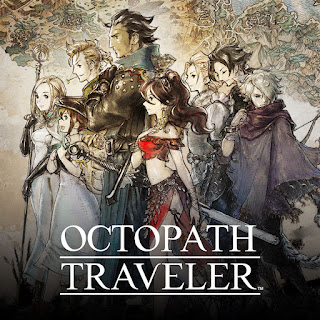 Lately, my gaming time has been in Octopath Traveler. I’m looking for a good pause point so I can resume Bravely Default II and make more progress there. In any case, I’m enjoying both games greatly.

Approaching 60 hours in Octopath, I’ve reached the final boss for both Cyrus and H’aanit; they’re tough! I’ve lost one battle to each already, just to sample what I’m up against. I’ve obtained only one of the special end-jobs and have attempted a second to no avail yet. I think they’re critical to help defeat the final bosses for each character, so that’s a definite goal I aim to attain. But rather than directly grind towards that goal, I decided to first finish the chapters for my other current party members, Ophilia and Tressa.

I like how all four of my characters are nearing level 60, which simply resulted from a focused push for Cyrus’s fourth chapter. This means when I return to other characters’ lower chapters, they’re quite easy to finish quickly since my party overall is over-leveled. So sometimes the game is a challenge, and other times it’s almost like enjoying story-mode. It’s good that there isn’t a constant struggle or grind. As always, exploring the map, finding new shrines or caves, is fun. And battles never seem to get boring; I love breaking those shields!

So I think my plan is to reach the end of Chapter Four for each of my current party members and then defeat the final boss for Cyrus, “beating the game” for one character. Then after that, I’ll pause Octopath and resume Bravely Default II for a while. And once I reach a good pause point in BDII, I’d like to go back and beat all the bosses for my current Octopath party.

This is where it gets intersting, due to Octopath’s somewhat open design. Once I’ve finished all the chapters and bosses for my four main party members, I’ll basically be able to “restart” the game with a whole new party, the other four characters I only did one or two chapters of. I can either use a party of all four of them at low levels and work my way through the game, or I can only swap one or two new characters with my current party, giving myself an edge against lower level enemies as I make progress with the other characters; approach four new stories at once or take one or two at a time.

This is a strength in Octopath, the way it’s designed to be kind of open to how and when you play each character or story. You can jump between them at will to avoid tedium or potentially gain new weapons, armor, and job skills to use throughout the game. Or you can stay on a single linear path, seeing it straight through to the end. With eight paths to travel, and with the ability to fork them at pretty much any time, there are many ways to make progress in the game. Combine that with its exciting battle system and excellent graphics and music, it’s no wonder this game is my second favorite JRPG of all time.

If I didn’t have several other great RPGs on my backlog, I’d likely replay Octopath from scratch and take a whole new varying and winding way through the game.

Thinking ahead, once I have savored every last drop of both Octopath and BDII, I’d like to knock out one or two realtively short RPGs, maybe Ys Origin and Rise of the Third Power, and then embark on the epic adventure in Xenoblade Chronicles: Definitive Edition.

As always, so many good games, so little time. It’s challenging to be content and enjoy – savor – every bit of a current game, taking my time and not rushing through just to jump to the next great one.