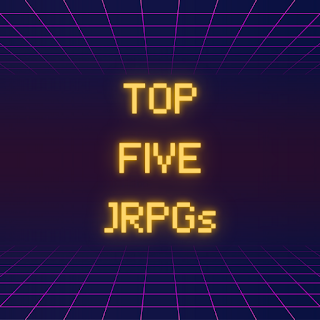 One way to enjoy JRPGs — when not playing them — is to geek out about them with other role-playing enthusiasts. In that fun spirit comes The Great JRPG Showdown! It’s a collab between bloggers Pix1001 (Shoot the Rookie) and Winst0lf (Winst0lf Portal), who have teamed up to ask:

What are your top five JRPGs?

With answers submitted by March 22, they’ll tally them and present the results. Joining the fun, I share my top five and how I chose them.

With so many great JRPGs in the gamerverse, it’s hard to pick my favorites. While it’s easy to say which ones are most memorable — like EarthBound — games that leave indelible memories are not necessarily my favorite. Most titles I’ve played are also enjoyable, like Final Fantasy X…yet it, like other good ones, missed my top five.

Since most of my JRPGs are memorable and enjoyable, I asked myself which ones are replayable. None are perfect, so if I’m willing to replay one, it must be special. That said, I plan to replay Final Fantasy IX, but it’s not in my top five. I also asked, “Which game would I want on a proverbial desert island?” Though I really like Dragon Quest XI S: Echoes of an Elusive Age – Definitive Edition and Xenoblade Chronicles X, they too fell below the best for me.

Once I finally chose my top five, I ranked them from least to greatest, considering their qualities of presentation, gameplay, and story. From visuals, music, and battle systems to exploration, side quests, and character progression, I scrutinized each game.

With that said and without further ado, I present…

Ni no Kuni: Wrath of the White Witch 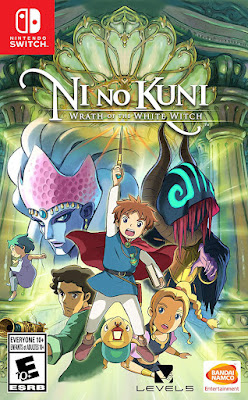 Though previously released on PlayStation 3, I played this on Nintendo Switch. Its weakest trait is probably the combat system, a mix of real-time action and turn-based menu selection. Combined with three playable characters in battle that can swap out one of several creature companions like a tag-team, fights are often a frenzy of quick thinking and luck. Despite that, I found combat to be robust, engaging, and challenging. Other aspects of gameplay are great, featuring large labyrinth-like areas to explore with simple puzzles to solve along the way. Enemies are easy enough to avoid or engage at will; no random encounters here.

What makes Ni no Kuni so special is its overall presentation and heartfelt and wholesome story. The Studio Ghibli visuals look beautiful and the high-quality orchestrated music is stirring. The narrative sets this JRPG apart from most as it centers on a young boy who dearly longs for his mother. Though beset by tragedy, the unlikely hero musters courage to fight, heal the hearts of others, and ultimately defeat evil. It’s a touching story told well…and Drippy is fun! 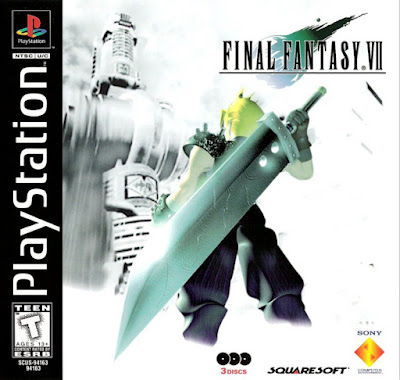 This JRPG is likely in most players’ top five. I first played it on the PlayStation and then replayed it on the Switch. There isn’t much I can say about it that hasn’t already been said. It’s so good, developer Square Enix totally remade the game for modern systems (I’ve not played the remake); it’s been a hit all over again.

Despite blocky polygon character models, FFVII had remarkable presentation for its time. Pre-rendered CG backgrounds almost seamlessly transition to full motion video cut scenes, and each environment is accompanied with fitting music by Nobuo Uematsu. Gameplay is great, with tons of exploration and travel via land, air, and sea. The battle system is pure turn-based menu-driven fun, featuring impressive summons (I never did get Knights of the Round, much to my dismay). The weapon/armor/materia system for equipping abilities is also well done.

The story is intriguing, mysterious, and complex, and its scope enveloped the entire planet, which made playing the role of main character Cloud feel intense, gravely important, and engaging. The narrative arc included a sinister villain and had serious dramatic turns. The overall cast and characterization of each member is also noteworthy. 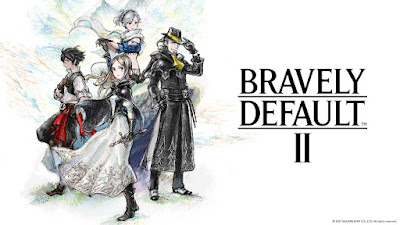 I’m currently playing this game with over 50 hours, savoring every moment because when I finally started this title, I had found a splendid JRPG. The story thus far is not the typically convoluted JRPG narrative. It presents the simple and straightforward quest of the chosen one to find and restore the realm’s powerful governing crystals and defeat the many villains throughout the land. The tale is well told through simple skit-like cut scenes with nice voice acting and also through optional party chats that help flesh out the four heroes of light.

The level of detail in the game’s presentation is excellent, from varied biomes to water color-styled towns. I like the aesthetic of the chibi character models and the distinct monsters in battle. The overworld is easy to explore and gorgeous to behold. The soundtrack is also very well done, with the overworld theme adapting to each region.

Gameplay is fun, engrossing, and features an oustanding job system, with each job adorning the characters in unique costumes or outfits. Jobs grant access to a wide range of abilities to mix and match as each character can have a main and a sub job. The battle system is great, allowing up to four different moves in a single turn. I’ve often used this to resurrect, heal, and buff an ally then attack the enemy. There’s strategy to the turn-based battle system as players must weigh when to default, store brave points, and unleash them at the right moment. 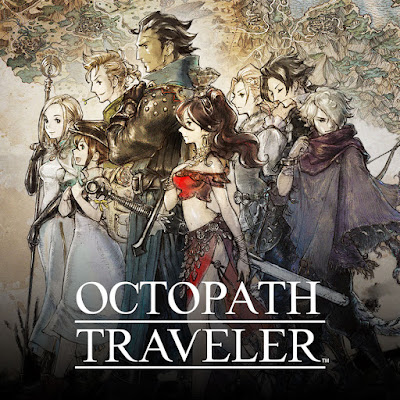 While its story (or stories) to many is lacking, I find the seemingly disjointed narrative to be a refreshing and time-respecting change of pace, and I think it partly comes down to expectations. JRPGs are known for singular sweeping narrative arcs, spanning hours of gameplay and uniting a cast of characters with great interaction. Where most find Octopath a jarring departure from the norm storywise, I find the eight individual paths intriguing. With over 50 hours of gameplay so far (playing concurrently with Bravely Default II), I find the stories offer variety and flexibility. I love that I can follow one path for a chapter and then switch to a different one. (For more on this, you can hear me in a recent episode of RPG Backtrack at RPGamer.)

Above its story, the game’s presentation is an obvious stand out. The pixel art hearkens back to the 16-bit era when I first discovered the JRPG genre. But beyond mere nostalgia, it polishes the sprites to brilliance with the HD-2D style in what I call neo-nostalgia (I explain this more in How Modern Pixel-Art RPGs Shine at RPGamer). Suffice to say, I’m a total fan of the visuals. With them is an outstanding soundtrack full of delightful and enchanting themes for each region or character, and battle music is a driving force. It’s a fantastic presentation package.

Like its presentation, Octopath‘s gameplay also shines. Interconnected landscapes are laced with winding paths and out-of-the-way caves to explore. I enjoy the trails and somewhat hidden treasure chests that are found by observing where foreground overlaps background. Towns are also varied and interesting and bring a feeling of safety and serenity after trekking the monster-filled wilds.

My favorite aspect of the gameplay is its awesome and addictive battle system. Similar to Bravely Default II, players can store up boost points (versus brave points) to use multiple attacks or boosted magic or status effects in a single turn. For example, rather than heal, buff, and attack during one character’s turn, I can strike three times in a row or use a magic spell with three times strength. This is combined with a simple yet engaging break mechanic. Each enemy has a shield that’s weak to certain yet unknown types of attacks. Players must discover the weaknesses to shatter the shield quickly, which causes the monster to lose the current turn and the next one. During that time, depending on party status, the player may unleash more attack damage on the unguarded foe, or the player can use that time to heal or buff the party. Overall, I find it more visceral, action-like, and satisfying than even Bravely Default II‘s admittedly great combat.

I played this title as Final Fantasy III on the Super NES long ago; it was my first ever JRPG! A masterpiece of video game storytelling, it hooked me into the genre. The story is a ten out of ten and remains the best of any RPG I’ve played. Its enormous cast of varied characters is presented strongly, with each sprite manifesting more emotion than one would expect, thanks to Nobuo Uematsu’s excellent music. The combo of magic with technology, and those who wield it, sets the stage for a cataclysmic plot, featuring the best antagonist ever, Kefka, the kind of villain one loves to hate. Like Batman’s Joker, he’s a smart yet sinister psychopath bent on nihilism.

For the 16-bit era, the game’s presentation was great, with top-shelf sprite work and the SNES’s Mode 7 graphics for 360 rotation. Gameplay is fun and engaging with plenty of exploration across balanced and ruined lands, and battles feature Esper-enabled summons that dazzle in turn-based combat.

I plan to replay this game. The pixel remaster recently released, but I’m waiting for either it to arrive on consoles or for an HD-2D remake.

With my top five JRPGs being almost equal, ranking them was tough. And since I haven’t finished two of them yet, things could definitely change. With so many great JRPGs, I’m always hoping to find the next best one, which might be Xenoblade Chronicles: Definitive Edition. I plan to enjoy my first play-through of it soon and will see where it ranks. That said, Tales of Vesperia: Definitive Edition, Chrono Trigger, and Ys Origin are also high on my backlog.

What are your top five JRPGs?
Topics: Gaming