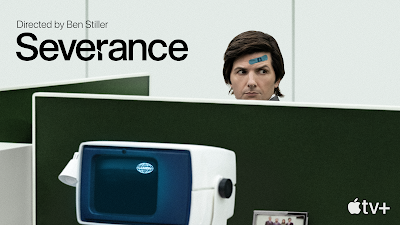 No major spoilers, but there are minor ones.

After watching the first episode of Severance, a new thriller series on Apple TV+, I was wholly ready for more; no schism in my mind. The show’s creepy and mysterious vibe reminds me of the Twilight Zone.
The premise is simple enough. Employees at a company elect to undergo a procedure called severance, where the brain is somehow divided, thus completely separating one’s work life from their personal life. Never-mind that the neuroscience doesn’t exactly match reality; TV fiction is for escapism. The draw is to see the big “What if?” What can actually happen if such a scenario were possible? The implications of severance seem plausible…yet controversial and disturbing.
The TV show does a good job adressing the real consequences of such a set up. While the main character, Mark, expresses positive feelings for being severed, each episode brings examples of its problems. In one episode, there’s the morally questionable notion that one’s work self could have a girlfriend within the company while one’s outside self could have a wife at the same time, yet each self would be totally unaware of it. Another issue raised posits that one’s outside self could be a serial killer while one’s work self is an outstanding employee who doesn’t even steel a paper clip, yet each self would be oblivious to it.

Counter to these potential conundrums, the company at the center of the show, Lumon, frequently reassures its severed employees that their outside selves are highly idealized citizens in society, successfully enjoying life to the fullest at all times. Though it sounds far fetched, the mind-split workers happily accept the good news, except for the newest severed staff member, Helly. Her work self quickly decides being stuck in perpetual work hell is hopelessly unwelcome.
Only three episodes have been released so far; I’m eager for number four. But after watching episode 3, I wondered, did the plot advance at all from episode 2? Because it seemed to show the same things, mostly. But I think I see a point. The main character, Mark, was given a reason to investigate what his former coworker, Petey, had talked about — the hidden and sinister stuff going on inside Lumon. Seeing Petey’s unfortunate outcome, I think Mark will now want to learn more about what Petey was trying to convince him of in regards to Lumon. Mark might eventually see good reason to become un-severed.

So episode three helped develop more of Mark’s character arc. He starts in the overall story as wholly devoted to severance, believing it is moral, ethical, and beneficial. It helps him personally deal with the loss of his wife. But now I think the loss of his friend and former coworker, Petey, will compel him in the other direction. Though Mark freely chose, so it seems, to be severed, he is confronted with the possibility that there’s more to it, something nefarious beneath the surface. He will more likely change his mind and, for example, decide to take the risk of following the map Petey hid for him.
Also, I think there must be a map connection with the old house replica, a secret inside it. As for the wax figures…my first thought was that formerly severed employees had been turned into wax to keep them quiet at some point. Basically, once someone gets severed, they never go back. They’re cut off forever from the rest of life. And Helly, did she get truly broken in the break room, her heart contrite for her evil misdeeds inside Lumon? Or is she faking it, still seeking a way out of the company? Will Mark be more devoted to his company, Lumon, or his coworker, Helly, helping her either quit or get to work?

There are some other interesting characters in Severance, both inside and outside Lumon. It’s too early to tell what could happen. I’m hoping that any plot twists and reveals are fully worth the wait, and that the built-up tension reaches a satisfying climax towards the end of the season.

Have you seen the show; what are your thoughts?