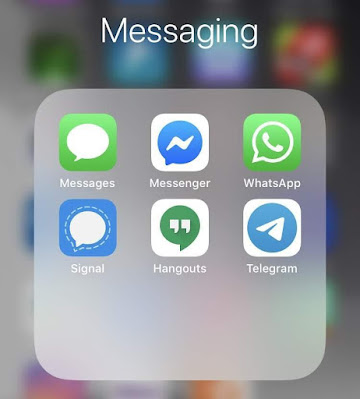 News about Apple’s and Google’s messaging services simmers on the front burner. Two different views in particular stood out to me yesterday, one from long-time Apple writer John Gruber and one from Android writer JR Raphael. Both offer good points and are worth your time to read. They got me to suspect that the RCS text standard won’t succeed — which led to a related thought experiment — then another piece by Ron Amadeo at Ars Technica confirmed my suspicion.
There are pros and cons to the blue messaging/green texting situation. In a recent post, I pointed out one real downside I see in practice on my iPhone, that an SMS text message (green) ungroups an iMessage group chat (blue). It’s not that big of a deal to me, but there are other downsides to SMS that hurt Apple’s Messages. One worth mentioning is that end-to-end encryption, a crucial strength of iMessage, gets undone with SMS texting.

In JR Raphael’s piece, he promotes a solution that may be merely a stopgap: that Apple should adopt the RCS messaging standard as a replacement to SMS. This seems like a good approach, one that I thought couldn’t hurt and would probably be for the better. One benefit to gain: RCS supports typing indicators like iMessage. That said, I later realized that the solution, or replacement, to SMS (or any form of texting) has already been implemented across most of the world.

Gruber’s article mentions it where he paraphrases Ben Thompson:

“Pre-iMessage, the U.S. was an outlier for SMS, because U.S. carriers made SMS text messages free, or included so many SMS monthly text messages in their plans that they were effectively free. Whereas elsewhere around the world, SMS text messages always cost at least 10 cents a pop — often more — to send, which was a big motivation to find alternative messaging services.”

RCS Is Not The SMS Alternative You’re Looking For

Before iMessage arrived, SMS was not a viable option for many people outside of America due to its high cost and how carriers handled texting. So when smartphones became popular, with their computer-like capabilities and persistent data connections, most of the world abandoned old-school SMS — and they didn’t turn to RCS or any other new textingstandard. Instead, they found alternative messaging services with better features. As Gruber points out, Apple also sought an alternative messaging service to SMS. They found it: iMessage.

This makes me wonder, does Google’s push for RCS miss the point? Do we really need another alternative messaging service to SMS? Since we have smart-phones, why shouldn’t America embrace web-based messaging — such as Line or Telegram or Apple’s iMessage — like the rest of the world? I think many Americans have, in fact, adopted rich messaging solutions, so there really isn’t a need for a new standard replacement for SMS texting.

A problem I see, though, is that different apps and services for rich messaging create communication siloes. For example, one person I know uses WhatsApp, another one uses Facebook Messenger, yet another I chat with is on Discord. To talk with them, I must use different apps, which is not ideal. Many others I know enjoy Apple Messages simply because they have iPhones, so it’s easy to chat with them, whether I’m on my iPhone, iPad, or Mac. As good as iMessage is, though, it’s proprietary, yet another silo.

Maybe the RCS standard would solve the silo issue. Imagine if everyone you knew actually used the same exact messaging system all the time; wouldn’t that be convenient? That said, I think it’s too late to launch another messaging service. Despite the chat app silo situation we have today, people are already set in their preferred messaging services. Everyone seems to manage communication as things are now, and I doubt most people would welcome a change to something else, even if it’s better. RCS, though, doesn’t appear to be better at all. Ron Amadeo of Ars Technica is clear when he decries RCS:

“[RCS] is a 14-year-old carrier standard, though, so it lacks many of the features you would want from a modern messaging service, like end-to-end encryption and support for non-phone devices.”

“…it’s a poor standard to build a messaging platform on because it is dependent on a carrier phone bill. It’s anti-Internet and can’t natively work on webpages, PCs, smartwatches, and tablets…”

What if Apple decided to no longer support any fallback system outside of iMessage? It’s perfectly within their prerogative to drop SMS if they wish. Of course, Apple would need to consider how such a move would affect their overall strategy. It’s not hard to imagine, though, how Apple could think that simplifying their Messages app by dropping SMS and ignoring RCS could be a good idea in the long term. Just let outdated SMS die like the texting plans Americans once paid for.

If Apple drops SMS and dismisses RCS, then how would I textmy dad on his Android phone? I wouldn’t. Then how would we communicate? Instead of old-school texting, we’d use one of the many ubiquitous web-based apps already established. In our case, that’d likely be Facebook Messenger. While that wouldn’t be my first choice — because Facebook Meta — I’d still communicate with my dad and enjoy modern messaging features as well.

Should Apple replace SMS with RCS, or should RCS exist at all? What do you think?
Topics: Computing