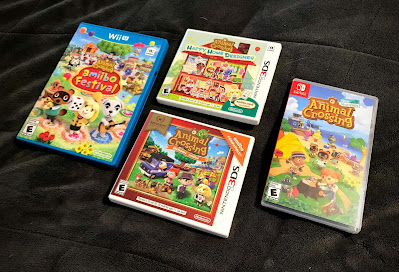 ACNH is awesome! It is a super-chill and beautifully made game. You start on a deserted island with practically nothing. Then you slowly build up a community there with new town buildings and houses and infrastructure. You can decorate the inside of your house and also anywhere outside. Want a flower garden or a playground? Go for it!

The graphics on the Switch look splendid, better than ever. The level of detail in all the 3D objects is superb. There’s a museum on the island to display all the fossils, bugs, and fish you find. By itself, you can literally spend a long time slowly walking through the exhibits gazing at the gorgeous detail throughout.

As in previous games, ACNH has collecting galore. But new to the game is crafting, and it’s excellent, albeit somewhat simple. But simple is perfect for a relaxing casual game such as this. It also has designing, whether its fabric patterns or total town layout. And another new aspect is terraforming! But I’ve not yet arrived at that level of the game.

So there’s a lot to do in ACNH. But what do you really do? What is the goal? There are, of course, goals within the game, things to accomplish, status to achieve. But at its heart, the game is very interactive, so you just do things. It’s not about the destination, it’s about the journey! I don’t care how cliche that sounds, it’s accurate about the game. The fun in ACNH is in doing all the things more than having done them.

A key element of the game since its inception in the late 90’s is, of course, as solid as ever in ACNH. I speak of the real-time clock. Things in the game happen in real time and according to the calendar and seasons of the year. It takes time for flowers to bloom, trees to grow and bear fruit, buildings to be constructed. Most of all, it takes time to develop good relationships with your neighbors.

All that said, there is one particular aspect of the game that had me scratching my head in the first week. The number one thing that the game has always been about from the beginning was the social interaction between you and the other residents of the town. It’s about…Animal Crossing. That is, the heart of the game is about socializing with the anthropomorphic animals that live in the game. The life of the game is crossing other animals’ paths and interacting, communicating, trading, and even emoting with them. ACNH is a life-simulation game.

This soul of the game seemed to be missing in the first week I played. It made me wonder if somehow it was lost, replaced by the new game mechanics such as crafting. But there’s nothing to worry about here. At first, you simply arrive on a deserted get-away island, and only 2 other animals arrive with you. So in the slow-paced beginnings, there is almost nobody around to socialize with. Instead, you’re focused on some basic quality-of-life improvements to get the community started. In past games, there was already a town filled with animals to get to know. But in ACNH, there is more of a slow build-up to all that. In my opinion, this has turned out to be wonderful.

I don’t know how intentional the blank-slate town start was, but the psychology behind it is cool. We are all social creatures by nature (even us introverts need a friend or two). We are made to enjoy relationships with others. This human-nature is reflected in Animal Crossing, only it’s more anthropomorphic animal-nature.

Starting life on a deserted island presents an emptiness, a lack of relationship as well as town structures. As you grow the town, so too does the apparent lack of animal interaction other than the relatively few starter inhabitants that joined you on the island. Slowly, more new animal-people move to the island and bring new life with their unique artificially intelligent personalities, some of which have many quirks. Like real people.

Being a Nintendo game, the level of polish and wonder and fun in ACNH is laudable. It’s also par-for-the-course with what is expected of a triple-A title game from a company that seems to have gaming magic in its DNA.

If you’ve never played Animal Crossing, wow, there’s no better time to jump into this franchise. It is a game that you should buy a Switch for. This game, only $60, keeps giving you more content over time. As seasons unfold in real time, so too do related events within the game world.

New people arrive. Some may move away. New things happen. More bugs and fish appear in season. Spring Bamboo can be found now. But come Autumn, you’ll be able to collect acorns and pine-cones to craft new items. The game keeps giving. And since there’s no real end-goal, you never beat the game! You just keep living it out, enjoying the journey.
Topics: Gaming
Newer Post Older Post Home