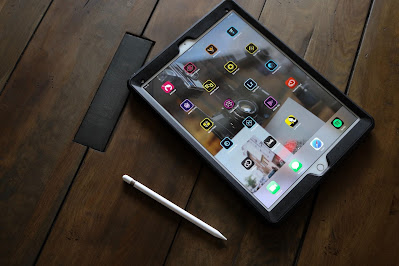 This week there were many shared thoughts on the web about the 10th anniversary of Apple’s iPad reveal. Now the “future-of-the-PC” is a decade old! And after 10 long years of hardware upgrades and software changes, the question remains: Can iPad replace a laptop/”real” computer?
My answer was yes for a time. I really wanted the iPad to be my only PC. I had that first iPad, and I used an iPad Air 2 as my primary computing device for over a year. As tablets go, the iPad is fantastic. But I switched last year away from iPad…and I’m loving my Chromebook!

Let’s be straight up front. The iPad is a computing device in broad terms, and it can be your primary computer – if it works for you. So the iPad being a computer is relative or subjective.

That said, there is some consensus that an iPad is objectively not a computer, or at least not a very good one. The credible opinions I have in mind are recent articles or podcasts from both pro-iPad and pro-Apple tech writers. I’m talking about Dieter Bohn, John Gruber, Ben Thompson, and John Siracusa.

Their experiences and thoughts echo my own. The iPad is unparalleled when doing what it was originally designed to do 10 years ago, things it does “far better” than a phone or laptop. That is, I love iPad as a tablet. Sure, call it a “tablet computer”, but it’s a tablet. It is meant to fit between a phone and laptop, not become a laptop.

The iPad became sub-optimal when I added a bluetooth keyboard and used the multi-tasking features that Apple added over the years. Trying to use iPad as a laptop replacement pushed its inherently designed limits too far, showing its weaknesses. It was frustrating: multi-tasking is a bit convoluted and fiddly.

Most of my productivity work was simple: writing and blogging. But even text manipulation on iPad, after 10 years of evolution, was still woeful at times. I found myself resorting to my clunky old PC to tweak my blog and write. Ultimately, it led me to switch back to a Chromebook, which is much more of a “real” computer than the iPad.

When it comes to needing more than what a tablet offers, Chromebook hardware has objective advantages over iPad: bigger/more screen for less money, a physical tactile keyboard built-in, micro-SD expandable storage, lap-ability, touchpad cursor control (or mouse), and the screen folds to any angle. Chromebooks also match several of the tablet’s strengths: all-day battery life, instant-on, simplicity, and security.

There are also distinct software advantages: Google’s full or desktop-class web browser (without work-arounds), Google’s office apps (Docs, Sheets) which shine on the web, and Google Drive cloud storage/files app. Chrome OS itself is simple enough to grasp, using the classic desktop metaphor along with the most popular web browser. It’s kind of a no-brainer.

But are Chromebooks and Google’s cloud services perfect? Of course not. They’re excellent, maybe unsurpassed in key areas, but they’re still computers. Case in point, my 6 month old Chromebook recently began having sync issues. There were 50 files that tried to re-sync every time I logged in. I could not find them or clear them out. It slowed my Chromebook to a crawl, making it pretty much unusable.

Yet after a quick Google search (of course), I was able to find a solution that worked. It seemed scary at first, but it turned out to be harmless, simple, and fast. I “Powerwashed” the device, which just means it was reset to factory condition. It took only seconds to do. And when it was done, I logged in and found the Chromebook both new again and about 99% exactly the way I had it set up before! My desktop wallpaper was the same, and all my apps reinstalled promptly. The shelf even had all my web-app shortcuts. And the file sync issue was gone for good! On top of that, it is running faster than before.

Reflecting on the iPad this week for its 10th anniversary and experiencing my restored Chromebook both served to bolster my delight and favor of Chromebooks. Between a laptop computer and a smartphone, I’ve got all my computing bases covered very well. For me, there really is no room for a tablet like the iPad. But if there is for you, or if you enjoy iPad as your main computer, more power to ya.

The iPad can still be greater. Who knows what Apple could do in the next 10 years!? Even now, the iPad Pro 12.9” coupled with the Apple Smart Folio keyboard is compelling to me. Maybe the iPad line will grow into more distinct products. The regular iPad at the low price tier can be your tablet. And the iPad Pro at the high price tier can be you computer. What if iPad OS became modal? A traditional touch interface in tablet mode, and then with the Smart Keyboard attached, the iPad enters desktop mode where all apps reveal window chrome and buttons to be used with a mouse or trackpad.
Topics: Computing
Newer Post Older Post Home