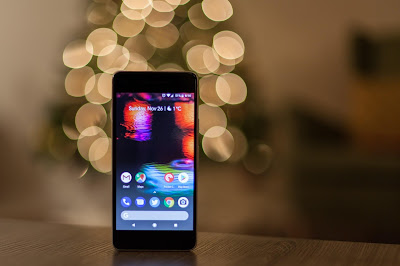 Last Summer, when I ditched my iPad and switched to Chromebook, I started thinking about doing the same with my phone – iPhone to Android. Naturally! It just makes sense to go all-in with the Google stuff. But I hesitated, finding it a bit concerning to fix something that isn’t broken. My iPhone 7, despite its age, is working great. I’m comfortable with the quality and reliability; also, there are a few key apps/features that I would miss.
A few months later, I found myself re-visiting the idea of switching phones. The iPhone has a lot going for it, but my mind has changed. I’ve decided to move over to Android! So what’s the big deal?

As I mentioned, one of the big draws to an Android phone is that all the Google apps I use daily would be the default apps! Click a link: Chrome would open instead of Safari. Heck, I could have Firefox open if I wanted instead! Sharing via mail: Gmail would open instead of Apple Mail. And best of all: Google Assistant would default instead of Siri. You get the idea. Overall, Android’s flexibility (and openness) is more efficient than iPhone.

Also very attractive is Android’s customizability. Get bored with the way your phone looks? You can totally change it up…but not on iPhone. Want to see the nice photo you set as wallpaper? No probs! Just move your app icons anywhere you wanna! Heck, you can have zero apps on the screen too and just dive into the App Drawer where all your apps reside. Nice!

I know these features first-hand because I used Android for several years. I’ve already switched back and forth between iPhone and Android. So another reason I’m wanting to switch back now is because of the novelty of it. I’m ready for something new.

Now, onto one of the grandest Android features of all! Affordability. Even though $1,000 Android phones exist, you can also get a great Android phone on a budget. But are they worth it? Yes! I love how there are a number of phones competing in the market at the entry-level and also at the mid-range phone level. You can say that mid-range Android phones today are the affordable versions of the flagship-level phones of yesterday. Since smartphone tech has advanced so much now, you can get an Android phone without compromising or sacrificing all that much. And without emptying a bank vault.

Because there are truck-loads of Android phone makers producing multiple phone models for every budget, there’s another cool aspect of shopping for one instead of an iPhone: variety. Beyond the simple glass rectangle of a phone, in the Android space, you’ll find different sizes, colors, features, and benefits. While this abundance relates to a downside called “fragmentation”, which can be a mixed bag, I find it really nice to have so many phone options. In contrast, the only iPhone variety you have is: the new one or an old one. Or plain, plainer, and plainest. Or costly, more expensive, and exorbitantly priced. No thanks.

Finally, I recently found a bonus feature of Android phones. It’s called the Google Family Link app. So let’s call this feature, Family. This app from Google allows a parent to easily control multiple aspects of their kid’s phone. Yes, Apple has something similar, which I currently use. But the Google Family Link app appears to offer better or more granular control than Apple’s set-up. The fact that I can also keep tabs on my kid’s Chromebook activity in addition to their phone habits is salsa on the chips!

There are other areas to consider about Android versus iPhone. One of the biggest and trendiest these days is the two-punch combo of Privacy/Security. In some ways, I still think Apple and iPhone are best-in-class for this. But Google and Android are also great; I consider them trustworthy enough.

So now I’m saving up my pennies and dollars to make my next smartphone purchase a shiny new Android. I’ve set my sights on the reduced-price Moto G7 to replace my iPhone 7. The cool extra benefit to this will be the similarity and affordability of also replacing my kids’ iPhone 6 with the Moto G7 Play. If it all works out, I may blog about it in the not-too-distant future.

Speaking of the future, here’s another good example of Android variety. Microsoft has announced they plan to release a two-screen Android phone called the Duo. It looks so cool! Will it be practical? Time will tell.

(For the record, I once was the proud owner of the Moto Q feature phone. And in my former Android days, I used the Moto X followed by the Moto G4. No, I never owned the flip phone Moto Razr…but have you seen the new flip-smartphone version?)
Topics: Computing
Newer Post Older Post Home