A Switch For Smartphone Computing 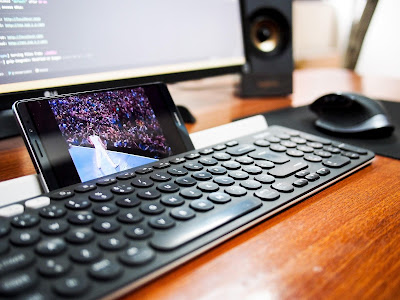 I found an article related to a feature in Android 10 that surprised me. And it got me thinking. What if your smartphone was like a Nintendo Switch?
The article I read talked about a potential upcoming feature that smartphone maker, LG, is purportedly working on. It’s a Desktop Mode. From what I understand, it lets you connect your Android 10 smartphone to a cable to output your phone’s screen to a large display. I assume it would also wirelessly connect to a keyboard and pointing device. This essentially would turn your smartphone into a desktop computer. And apparently, LG is polishing this native Android 10 feature to make it even more useful.

To me, this is intriguing.

Yet I think this can be marketed and understood better when thinking about Nintendo’s latest and very popular game console, the Switch. It’s main attractive feature is the ability to play the Switch as a tried and true home console on your TV but then easily and quickly take it on the go for an excellent handheld mobile gaming system. It’s a 2-in-1! And thanks to the design of the hardware and software, it works remarkably well.

So why can’t a smartphone work the same way? All you need is a good docking solution. Imagine being able to take your mobile phone, place it on a wireless charging mat, and then it auto-connects wirelessly (NFC/bluetooth/wi-fi) to a nearby display, mouse, and keyboard. Then the software turns on a desktop mode, letting you compute at a desk. Later, you just grab your phone off the charging mat and go! So easy!

Let’s say this set-up is totally feasible and will hit the market next year. The next question is, would you want this feature? Would you buy your next smartphone if you knew it could double as your primary desktop computer?

I, for one, think this could be great and would want to try it. To me, it wouldn’t be much different than a Chrombook with Android experience. Matter of fact, I would change the scenario a bit and have the phone wirelessly output to a Chromebook/laptop form factor for full mobile-desktop computing. I think the most attractive aspect of this idea is the simplicity of it. One device, one CPU, one storage drive, etc. It’d be one thing to power all your cloud computing.

Okay, so I just checked into this a bit more and found a related YouTube video. Basically, it is possible now to make an Android phone act like a desktop computer, where each app gets windowed and you can multi-task like traditional computing.

It’s intriguing, but it kinda feels like a niche experiment rather than a bonafide feature. It also looks like it might be fiddly with connecting the right cables and peripherals. But the wireless Chromecast ability of Android phones is one I had forgotten about; I want to see if that works with a bluetooth mouse and keyboard.

All that said, I’m also thinking that I like the simplicity of my two dedicated devices: a smartphone and a Chromebook. Both are small and capable and portable and serve me well.

In any case, I hope to see further development of Android’s desktop mode so that it becomes a common and powerful feature. In a few years, maybe using only a smartphone as your computer will be the norm.
Topics: Computing
Newer Post Older Post Home