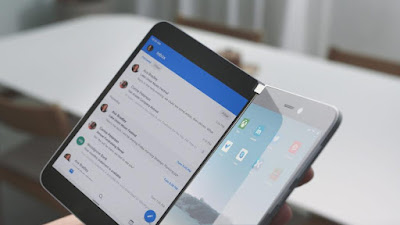 Tech devices keep evolving. The latest trend is dual screen folding devices. Samsung released the Galaxy Fold this year, and now Microsoft is heralding their own set of double screen gadgets. But where could this technology best be used?

The Better Whole Half

The Galaxy Fold has a single large screen that folds in half – like paper!

Microsoft’s upcoming new phone, Surface Duo, also folds with two separate screens, one on each side of a crease – like a book!

With those hints, the best place to apply this new tech is an eReader! And Amazon is likely to make one; in fact, it probably has a prototype already.

Somewhere I seem to recall that Amazon wanted to make eBooks as book-like as possible. And eInk screen technology made that a reality. The only thing lacking is the smell of a real paperback book.

Imagine how book-like an eReader would be if it had two screens that folded on a hinge like an actual book. Now that this tech has been shown as viable, all that remains is to make the two screens the eInk kind. And when you swipe the right screen, the software would make the pages turn as a true book.

An added benefit to this form of eReader is that it doubles as a protective case when closed. And since the screen tech is affordable these days, there could be a third eInk screen on the front cover of the folding eReader that always displayed the cover of the book currently being read!

Speaking of book covers on the Amazon kindle, why doesn’t it display the cover of the book I’m reading? When I turn off my kindle, the screen shows me book covers of stories that I don’t own. It’s a good way to advertise potential good-reads; I like this feature!

But the kindle would be even more book-like if Amazon made an option that enabled the cover of the book I’m currently reading to display on the screen while the device is turned off. It seems so simple; I’m surprised it hasn’t been done yet!

So are dual-screen eReaders on the way? That’s what the Good E Reader asked earlier this year, noting the same trend of folding phones. But it also pointed out that two-screened eReaders have already been released.

If Amazon were to make a folding eReader that felt the most book-like, would you buy one? It would be cool tech, no doubt. But I’m not sure I’d buy one myself. A single-screen eReader is simpler and gets the job done. It’s also lighter than a device with twice as much screen. Of course it’s also half the size, making it easier to hold.

But if anyone can make a folding eReader awesome enough to be a compelling purchase, it would have to be Amazon. They’re the ones that made eBooks take off in the first place. Until such a time, one thing is certain: I’ll be immersed in reading some books. On my kindle.
Topics: Computing, Reading
Newer Post Older Post Home