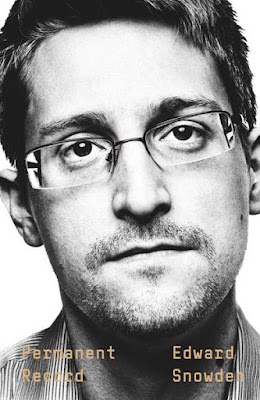 Maybe the US government is logging my keystrokes as I type this. Or maybe only Google is since I’m using Docs on a Chromebook to write. Ambient Privacy and Surveillance Capitalism are important topics. But for this review of Ed Snowden’s memoir, I want to focus on only the literary aspects.

For the record, Permanent Record is a good read.

More than that, Snowden’s account of the events of his life, leading up to when he revealed classified documents, is a great book that I didn’t want to put down. I devoured its pages over the weekend. Everybody loves a good story; Snowden’s story, and the telling, is fascinating.

When the memoir was released last week, my interest was piqued. But I thought I’d wait to purchase the book. By the next day, I saw on Ed Snowden’s Twitter account that the US government was suing him and/or the book publisher. If the federal system of America does not want Snowden to profit from his memoir, that’s one thing. But if it didn’t want me reading it, that’s another thing. Fearing the book might be yanked off store shelves, I decided I should buy it right away.

I’m pretty much a 100% eBook guy. I always want the digital version to read on my device. But knowing how easy it is for a company to delete, remove, or retract an eBook from eStores and eReaders, I wasn’t going to risk it. I bought Snowden’s hardback from Amazon just in time to get it before stock ran out, which happened by a day after my Prime order.

Snowden’s recount of his formative years leading to his dangerous decision to pull back the curtain on secret NSA operations gives the pretext and the context of that monumental revelation. His life, his decision, and the US government’s actions are on permanent record, thanks to Snowden and his memoir

It begins when he was a young boy, detailing key parts of his upbringing that help explain his personality and character, things that inform and influence his life circumstances, choices, and conscience, which all factor into that single point of deciding to bring to light the dark arts of one of America’s most secretive organizations.

Ed Snowden was a bright young man with a knack for computers. You could say he was one of the top web surfers in the world, riding one of the biggest waves to ever hit the shores of the States. Read: he was unparalleled in his aptitude for networking. It was intriguing to read about Snowden’s skills and how he honed them. Being part geek and part nerd myself, I related much with Snowden.

Even more gripping than Ed’s tech-star status were the inner workings of the US Intelligence Community (IC). Like many, I enjoy the entertainment of spy-thriller movies and espionage novels. This genre of stories is naturally intriguing due to the inherent secrets and mysteries shrouding the characters and actions involved. But in Snowden’s memoir, it is by default an order of magnitude more engrossing since it is a true story!

From a literary standpoint, of course Permanent Record is written in the first-person perspective, which makes it more direct and immersive. But it’s not written only by Ed Snowden. The last chapter is written by Snowden’s then girlfriend. It is a collection of her personal diary entries during the initial days Ed went missing. She tells a true spy story, involving the FBI, with raw emotion. It grabs you.
(not an affiliate link)

Permanent Record is a book I recommend you read. That’s another reason I bought the hardback version. I want to easily share it with friends or family so they can be sure to consume it.

If you want a good book to read, Permanent Record will not disappoint. You may not even be able to put it down. It has the real-life makings of a riveting story: drama, emotion, danger, action, secrets. I suggest you grab a copy while you can.
Topics: Reading
Newer Post Older Post Home