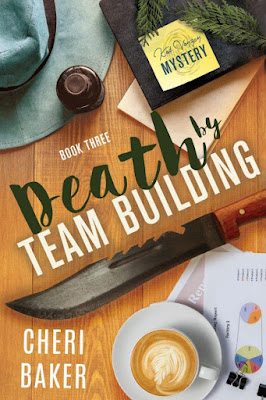 Ah, another good book finished. Feels good to wrap up a good story. I just finished the third cozy mystery in the Kat Voyzey trilogy by Cheri Baker. And this one was the most interesting and my favorite of the three.

Third time’s a charm? Maybe. But I think both the author and the protagonist came into their stride with this book, Death by Team Building. The strength of the writing and the confidence of the main character were bright while the setting of the story was cold and cramped. A cozy mystery that was not so cozy.

It takes place in a secluded lodge in the woods during an exceptional snow shut-in. Frigid were the feelings of the balanced cast of personalities trapped in uncomfortable company exercises that yielded to a crime scene. Talk about going from bad to worse. The Universe has a thing for bringing Kat Voyzey and murder together – for the greater good.

Both the cold of winter’s prickly temps and the victim who was iced rubbed emotions raw for the unfortunate captives. They knew the killer was hiding in plain sight with no escape for all. But the heroine had her wits about her, and copious coffee, so all hope was not lost!

The conclusion, as in the other books of the series, was tidily wrapped up with a feeling of satisfaction and gladness, for justice was served and Kat, the winsomely down-to-earth private investigator human resource wonder woman, was rewarded the harvest of accomplishment.

Of the three books in this series, this one was very different! It did not start as I expected, having a longer set-up. The second half went faster than the first. And, a rarity, I had a good hunch about ‘whodunnit’ in this story, and I was right! But my hunch was for reasons I did not expect with a few little surprises thrown in, which I enjoyed.

This trilogy has expanded my reading repertoire. Instead of only Sci-Fi and Fantasy, I now add Cozy Mystery to my list of genres to escape into. And happily, author Cheri Baker is working towards the next book or series of the same. I’m eager to read more of her stories that have been concise and charming.

They’ve been super easy to pick up and read on my smartphone whenever I have time for a short chapter or two. I don’t have to sit for long reading spells, which works well for a busy lifestyle. Because who doesn’t wrestle with that these days?

If you want to try something nice, do yourself a favor and pick up a free copy of Cheri Baker’s first Cozy Mystery.
Topics: Reading
Newer Post Older Post Home