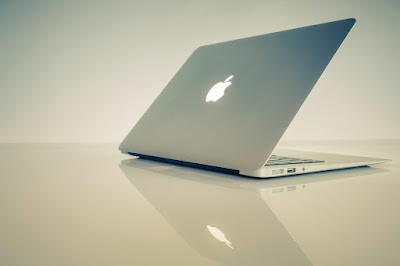 Living in Apple land was nice and comfy. My sweet set-up consisted of just two things: iPhone and iPad. Well, I guess I should also include the cheap bluetooth keyboard I cobbled together with my Apple tablet. But it’s good that I escaped the soft glow of The Apple logo because the Halo Effect is real.

I sometimes feel strongly attracted to Minimalism, which happens to be a trait of Apple’s hardware. The iPhone is a featureless glass rectangle. Even its software is simple, just a grid of rounded squares.

The best halo over Apple products is that they simply “just work.” And in keeping with simplicity, I was content with using only an iPad and an iPhone for all my computing needs, nothing more.

But Apple’s Halo Effect slowly pulled me into a shiny vortex, like a black hole swallowing light. Over time, I gravitated to more Apple products. And being the opposite of less, “more” is antithetical to Minimalism.

First it was the AirPods. I saw their new features in Apple’s marketing and had to have them. They became popular; most owners of AirPods loved them. So I wanted them more and more. And I almost bought them, despite their high cost.

Then another desire snuck into my psyche. The Apple Watch, which I had long dismissed as redundant, became attractive to me. It gained more features over time, making it better. It grew in user adoption; people like their Apple Watch a lot. I may not have needed one, but I started to want one.

Besides the AirPods and Watch, Apple’s Halo Effect also moved me with my typing needs to the Smart Keyboard. But it works only with the more expensive iPads, so I would need to upgrade. Nice, but it was a lot more money.

There was one more thing. For a brief time, and to my surprise, I wanted to buy a MacBook just to have the Photos app and its extra editing features that were missing from my iPad. But again, the price tag was too steep. My wallet can tolerate having less cash in it but not zero cash.

The thing about Apple products, great as they are, is that they also have horns hiding in the blinding glow of the halo. Apple devices are often far more expensive than their competitors.

The only way I could afford an iPhone and an iPad was to buy older pre-owned devices. When I shopped online for Apple’s shiny merchandise, I only considered used or refurbished. Yet even those products cost a lot.

I’m no longer sold-out to an Apple-only ecosystem. For technical reasons, I’ve switched from iPad to Chromebook. And for financial reasons, I sure am glad I switched.

Apple’s stuff is not cheap. Many people often depend on a payment program to afford living in Apple land. And now people can rely on a shiny new Apple credit card to get cash back on Apple’s high-margin wares. But outside of the aura of Apple, you can find great savings and huge values in tech gadgets.

Android smartphones compared to iPhone are so much more affordable! And there are great Android phones with fewer compromises than the $1,000 phone marketing would have you believe. Consider the Pixel 3a phone by Google. And good Chromebooks cost less than the cheapest iPad.

Going all-in with Apple products is swank, but the buy-in price is too high. The halo effect is alluring, but what I find more attractive is spending less money. There’s great value in being frugal. Looking outside of Apple, I see more bank-friendly options with fewer compromises than you might imagine.

A striking example, the one that dispelled me from from the halo effect, was Apple’s AirPods. As mentioned, I had wanted them for a long time. But their asking price of $159 is too exorbitant. So I finally tried a pair of wireless headphones from Amazon; they cost only $29 and they’re really great! Talk about more value!

This one purchase helped me to see, no longer blinded by Apple’s radiant halo, that there’s awesome tech products from other good companies, and they don’t cost an arm and a leg to buy.