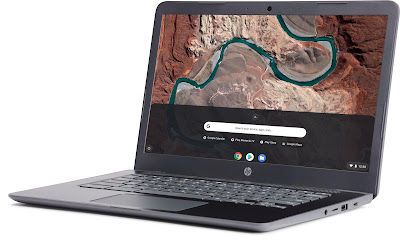 If you don’t have the right tool for the job, you try to make the most of what you’ve got. I tried to use my clunky bluetooth keyboard for a long time, pairing with my iPad to use it like a laptop. It wasn’t the best fit, so I searched for a better tool. And…you’ll never believe what I found!

After my wife brought home her shiny new Chromebook, this tech-geek saw the solution: an elegant unified device, a display and hardware keyboard designed to work together, always attached and connected. The fundamental form-factor was all there; it was a typing machine!

Chromebooks are very good affordable laptops for many people and most computing needs. They even match some of the best qualities of a tablet: simple, fast, all-day battery. So I was attracted, admitting the temptation in a recent blog post.

Then I began to realize that the whole time I’ve used an iPad plus bluetooth keyboard, the proper mobile writing machine I’ve longed for is a laptop.

Because the iPad is so nice to use, I tried to make the tablet do more and be more than it was designed to do and be: adding appendages or adapters, transforming its form-factor from slate to laptop. But it wasn’t the right tool for the job. It’s capable yet not optimal for long-form writing simply because it has no mechanical keyboard.

I couldn’t just ditch my awesome tablet, upend my computing workflow, and run out to buy a laptop! I’ve been all-in with Apple: just an iPhone and iPad. Chromebooks are Google-centric; Windows laptops are by Microsoft. The problem with switching from iPad to Chromebook is you’re not just swapping out a device, you’re moving to a new ecosystem. And just like in the wild, that means you must adapt.

If I were to flip-flop to using a Chromebook, I’d have to test out the Google-verse, dipping my toe into the water before taking the plunge. Ever the tech-geek, I became curious enough to do it. The thought alone helped me begin to escape Apple’s Reality Distortion Field.

The thing about switching to Google is how easy it is since Google’s apps and services are on the web; you don’t need to buy a special device. Google’s native computing platform is the web! So any computer you have – smartphone to desktop – lets you step into the Google-verse with a click or a tap.

After some initial yet futile resistance, I started assimilating into Google’s machine. First I Google-fied my iPhone, downloading all the Google apps I wanted to check out. I still had the empty shell of my previous Google account, so logging in was easy.

Second, I took my budget Windows laptop and downloaded the Chrome browser. Then I made all the Google web-apps into shortcuts, which open in their own windows, so they also have icons on the taskbar. This made my Windows laptop become a pseudo-Chromebook!

Enveloped by Google’s online apps, I started re-thinking my writing work-flow. I was reluctant to switch everything, but to me it just makes sense to go all-in and reap the benefits of a holistic computing paradigm. For example, this meant using Gmail instead of Apple Mail and stepping back from the Ulysses writing app to using Google Docs!

Overall, I was surprised and delighted by the capability and aesthetic of Google’s cloud computing platform. So in earnest, my hunt for a good deal on a Chromebook kicked off. Good timing too, because early August is the season for back-to-school sales.

In short time, my primary computer has changed from tablet to laptop because I needed and wanted a better mobile web-writing machine. I found an awesome deal on an excellent Chromebook and have been typing away – loving it! This blog post is the fourth I’ve published from my new Chromebook – directly to WordPress, using the convenient WordPress Add-On within Google Docs!

For this blogger, compared to a tablet, the clamshell laptop is the right tool for the write-job: big self-supporting touch-screen at any angle, full web-browser, and a full-size mechanical keyboard – and this one’s also backlit!

The iPad lacks a physical keyboard, the most basic tool for modern writing. You can add a keyboard, but that doesn’t mean you should. I’ll let the iPad be a terrific tablet, that third category device Steve Jobs said could live between a smartphone and a laptop.

I’m smitten with this new Chromebook, so I’ll probably post more about it and the whole switch-a-roo. Whether you’re a writer or you pursue a different occupation, be sure and use the right tool for the job. Don’t be afraid to change it up if that’s what you need to do. You’ll be glad you did.