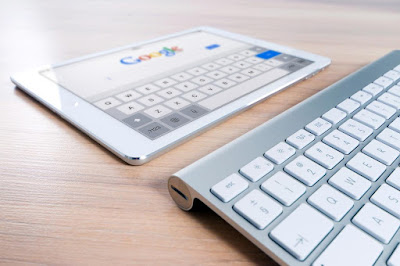 You’ve heard the saying about the right tool for the right job. Having the wrong tool is very frustrating. Technology is helpful if you have the right device. Let’s say you need a good selfie-camera – then a tablet won’t fit. What about blogging? I’ve used a bluetooth keyboard paired with an iPad for about a year. It works, but it isn’t the best fit.

The iPad is fantastic! I’ve enjoyed iPad as my primary computer for a long time because, for my needs, it’s very capable. The iPad’s giant touchscreen and operating system are fun and easy to use. And its instant-on and all-day battery make traditional computers feel antiquated and sluggish. The iPad looks and feels like the future of computing.

Maybe there are no keyboards in the future, but for now they’re vital. When you need to type out many words, the iPad’s Achilles Heel is the lack of a hardware keyboard. By design, the tablet is better than a laptop at reading the web, but not better at writing the web.

The glass software keyboard lets you tap out a short email or touch-type a few search terms online. But if you want to write anything longer, you need a physical keyboard. In fact, Apple visionary Steve Jobs showed a mechanical keyboard with the original iPad for, “when you really need to do a lot of typing.”

Apple has made excellent keyboards. But if you’ve heard the bad press about Apple’s problematic MacBook keyboards in the last few years, and their lack-luster attempts to improve the design, then you have a good idea of how critical a great keyboard is. It’s the right tool for the write-job.

To make my iPad more functional, it needed a keyboard and a stand. So I added those appendages; it worked, mostly. But the whole thing was clunky and frustrating. There were three problems.

The combo of detached keyboard plus iPad meant keeping up with two separate things. And they required a multi-step process to get up and running. The whole thing was the opposite of elegant. Not elegant is non-Apple.

It went like this: pick up iPad, unfold case, un-snap clip, un-snap next clip, and prop it up. Next, pick up keyboard, flip it over, toggle power switch, flip back over, and set it down. Then move each piece into good position where I’m sitting. Finally, press iPad button for home screen. The whole thing was a kludge; it got old. For a blogger who writes regularly, this repetitive process to get the job done left me wanting a better tool.

Despite being in a case, the iPad was almost too small and light to stand on my lap. I tried to sit on the couch or a chair and use my iPad and separate keyboard like a laptop, but the narrow base almost can’t bridge the gap from one leg to the other. It required a still and awkward position.

The bluetooth keyboard was also small and super lightweight, so trying to use it in laptop mode was cumbersome. It moved too much when I typed due to its small base and the fact it has no palm rest.

The final issue was the worst. My bluetooth keyboard was paired only to my iPad. But without fail, the wireless connection would drop out during my writing – so frustrating! At random, it would often disconnect when I paused writing, like between paragraphs or while editing, then reconnect automatically.

The problem wasn’t just being unable to type any words for a moment. It was also that the iPad’s on-screen software keyboard would pop-up, shoving the content out of the way or covering half of it up. I’d lose my place in the text, wait a couple seconds for the reconnect, then recompose and refocus my stymied flow of writing. At times it was barely tolerable.

The iPad is a sublime tablet. But forcing it into laptop mode makes it a dysfunctional design. Tired of that sour set-up, I considered one that would be more elegant and functional. I would need a combo keyboard-case-stand with a reliable bluetooth connection. This meant looking at more reputable brands and spending more money.

Of course, for elegance and quality, Apple is at the top. It has designed a physical keyboard folio to work with the iPad without the need for bluetooth! But it requires a new expensive iPad. And by itself, the least expensive version of the Apple Smart Keyboard costs $159! I’m not searching for sticker-shock.

The best solution I found was the Brydge Keyboard. It exudes elegance, attaching to the iPad and matching the color and metal finish. Combined with iPad, it looks like a MacBook! It turns your iPad into a clamshell laptop, a unified and whole device – the opposite of clunky. Plus it has a good reputation for quality, so I was almost sure its bluetooth connection would be solid.

But I didn’t buy it. Why? Besides balking at the $99 price tag, I was afraid that my iPad would lose its pure tablet functionality, the very thing it excels at by design. I’d be making it more like a laptop – great for writing – but to have the greatness of a tablet, I would need to detach the iPad from the keyboard. So what’s it gonna be, a fantastic tablet or a pseudo-laptop? For a long time, I could not decide.

Then my wife bought a Chromebook.

Once my wife brought home her Chromebook, this tech-head was seeing a svelte new piece of hardware. I had my dysfunctional tab-top; she had her proper laptop. I tried not to covet her new tech. But I could sense some temptation. What would I do?

Check back here on the blog in the coming days for the next part of the story.
Topics: Computing
Newer Post Older Post Home