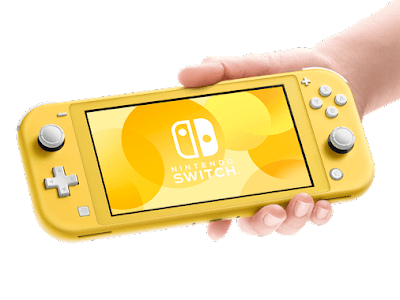 This here’s a bit of a reaction to Nintendo’s announcement that revealed a new version of the Switch called Nintendo Switch Lite. Yes, that’s right, new hardware! A new handheld gaming console, just like the Switch, only less!?

My family plays Nintendo, but maybe it’s time to switch to a Switch.

So the Switch Lite is like a Switch (heavy?) only it’s lighter in weight and lighter on your wallet. I don’t own a Switch (yet), so I don’t know if it’s too much to lug around. But a more affordable “Lite” version, for sure, sounds good to my ears. All both of them at the same time.

But if money were no object, would the Switch Lite be worth it? Of course that depends on your wants or needs. If my 5 sons want a Switch, I can now opt for getting each their own Switch Lite. Yeah, that would cost too many dollars. But it’s still compelling to me.

Let’s say I buy myself a Switch, the heavy pro version or whatever, and some great games – like the upcoming Pokémon Sword and Shield, and throw in Mario and Zelda. Because they’re Mario and Zelda! If my kids want to play Pokémon, but I’m playing Mario, they have to maybe wait their turn? What if we head out the door and I take my Switch with me to keep playing Mario?

What I’m getting at is, unlike owning a Wii U and a bunch of 3DS/2DS consoles that have totally separate game libraries, in the future things can be far simpler. I can have the Big Daddy Switch for my wife and I to share – the Parents’ Switch, the kids can have their own Little Kids’ Switches, and we can all share the same game library! This means we can share the fun of Nintendo more.

Switching to Switch sooner than later

I figured I would end up buying a Switch in a few years when the pre-owned price drops and the game library is even bigger. But thanks to Nintendo tempting me with Switch Lite, Pokémon, and the newest Zelda and Animal Crossing games, my wallet might fly away sooner.

Wired asked if a Switch that does not switch is really a Switch. Good question. It does not Switch, but it plays Switch games, and it’s cheaper. Nintendo gaming at affordable prices is the end-game.
Topics: Gaming
Newer Post Older Post Home