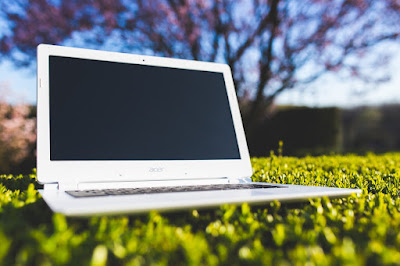 Until recently, the computery things in my house were kinda simple. My wife and kids used Windows machines; I use an iPad. This made my job as household I.T. guy not too hard. But now a Chromebook has been thrown into the mix. So things are a bit more interesting.

Being a tech-geek, a new computer gadget excites me, like a kid getting a toy and a dad getting a tool. But my wife doesn’t geek out over computers like I do. She wants them to just do what they’re supposed to do. Simple enough. I’d say that’s why smartphones and tablets are so successful. They simply work.

So while adding a Chromebook brings more complexity to my family’s tech-device matrix, it’s interesting because Chromebooks are so simple. The virtue of their simplicity makes them virtuosos in the computing industry. Like the fact that people don’t search for something, they “Google it,”Chromebooks went from niche oddity to mainstream commodity.

The strengths of a Chromebook still surprise me since the “laptop form factor” usually makes me think of traditional Windows laptops and their drawbacks. But those don’t apply here.

For example, on a Windows laptop, you get abysmally slow hard disk drives with their boot-up process that affords you time to catch up on reading that book you’ve been meaning to finish. But like a tablet, a Chromebook boots-up very fast – just a few seconds. You might have time to read a Tweet.

And their battery life is seriously amazing! My wife’s Chromebook lasts over 8 hours on a charge, and in sleep mode it goes for days between charges, letting her use it here and there. It’s like using a phone or tablet with all-day power supply, unlike using a Windows laptop for an hour and then looking for an outlet.

Besides staying on forever-and-a-day, Chromebooks are very inexpensive. Because they’re so simple, they need only basic hardware to perform well. So they usually sport the cheapest Intel processor yet don’t feel sluggish.

My wife ended up buying hers kind of on a whim. She was staying at her parents’ house trying to use her old Android tablet to do some simple Facebook Group coordination and Google Sheets and Forms collaboration. The old Samsung Galaxy Tab couldn’t do the job.

So she calls me up while I happen to be shopping at my local Walmart and says she’s thinking of running out to get a laptop so she can get her work done. We briefly discuss and rule out a budget or even mid-range Windows laptop. The budget ones are too slow and compromised; you’ll regret not spending more. The mid-range ones cost more than we could really afford on short notice.

Next thing you know, I’m selecting the right Chromebook for her to pick up in the town she’s at. And now, a week later, she’s really liking how easy it is to use her Chromebook.

Her case is not unique. Like many people, 95% of her PC desktop usage was – you guessed it – in Google Chrome. That’s it. So a Chromebook just fits. Most people often use online stuff like social media and Google Drive and Docs.

Throw Windows Out The Window

You have more options than just traditional Windows or Mac computers these days. And these options are better because they’re simpler devices where less is more. They’re even less expensive!

For iPad, get a bluetooth keyboard for it and you’ll have a tablet that acts kinda like a laptop and does most of the same stuff.

For a Chromebook, it’s a laptop that’s kind of like a tablet with its battery life and simplicity. They even have touchscreen Chromebooks now that run Android apps out of the box. So they can do a lot of what tablets can do too.

I won’t be switching away from my iPad back to a Chromebook, but I can’t say I’m not a bit tempted. I can say that I’m happy for my wife to finally enjoy being unchained from her traditional desktop PC, using just a Chromebook.
Topics: Computing
Newer Post Older Post Home