Ulysses The Right Tool For The Write Job 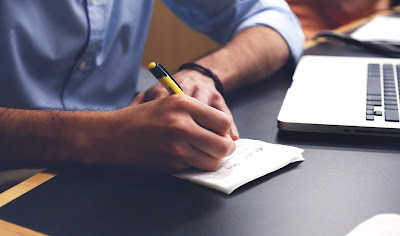 When you’ve got to get work done, it’s great when you have the right tool and super frustrating when you don’t. What’s more awesome is when you can have high quality tools that help you the best. I think I’ve found such a tool for writing: Ulysses.
I don’t know why they chose the name Ulysses, but it’s memorable. Maybe that’s why. It kinda stands out, which I guess is by design, because it’s considered a “Pro” writing app. So what’s it like? I had two weeks to find out. Let me hit the highlights.

First up, Markdown. I had heard about writing in markdown before, but using Ulysses is the first time I’ve ever experienced this simple kind of markup language. It’s not code, and it’s simpler than HTML.

To me, it’s a natural way to mark up your text in order to…define it. Instead of formatting or styling, you “define” text with special characters. If you’ve ever used a hashtag – # – symbol to tag your Tweet or Instagram photo, then you’ve got the basic idea of Markdown.

It was very quick for me to pick it up because there’s nothing to learn about it. Like picking up a hammer and whacking a nail, the concept is simple. It just takes practice to get good with the tool.

And I love it! Markdown is superb in its simplicity. It makes the process of writing better because it let’s you focus on getting the words out onto the screen rather than spending time on how those words look. It’s almost just like writing plain text in email.

The real advantage to using Markdown is how flexible and easy it is to export your text to practically anywhere and not have to worry about formatting. Have you ever written something in Microsoft Word and copy/pasted the text to some other app or site and had to fight the glitchy formatting of your words after you perfected them? I have. It’s a real headache.

Get your texts in order

I like the organizational scheme of Ulysses. It has a very nice library where you create either folders or smart folders called Groups and Filters. You can also make any number of sub-folders. This lets you go deep with putting stuff where you want it, but you can also just keep it simple.

You can also add any number of color coded keywords to your sheets. Sheets are like individual documents in Ulysses, but you never have to hit a “save” button. And if you want, you can forget using Groups and instead just use Filters for Keywords to auto-populate with all the right sheets.

Also, in the library list, you can choose to focus on just one Group or writing project at a time. This is great for minimizing distraction. It’s also great for hiding sensitive writing from nearby eyes.

Ulysses is all about helping you write all the words, getting them from your head to the screen in front of you. So it has a bunch of statistics or metrics like total word count, character count, and more. And it uses those with goal setting. So you can be motivated to type a certain number of words in a certain amount of time if you wish.

In the two weeks that I’ve been trying Ulysses, I set a goal to write at least 100 words per day in my private journal. During that time, I’ve hit my goal every day! The goal feature in Ulysses has really helped me achieve this small but consistent step in writing regularly!

The way it helps is with a nice little visual circle that changes color depending on where you are in your goal. You can tap it to enlarge it and see more detail. It reminds me daily to journal every time I see it. So I’m a fan!

The export feature is the magical part of Ulysses. It’s where you can see Markdown go to work for you. And it’s super handy! I’ve published 8 posts in the last two weeks straight from Ulysses to WordPress without a hitch! I’m still kind of shocked that it works so well.

So I wrote several posts in Markdown. Then I exported to WordPress, and the formatting, line breaks, dividers, headings…everything styled perfectly every time. It even got the images in-line correctly, grabbed the excerpt text and the featured image exactly how I expected. Not only that, it let me pick my blog Categories and Tags in the Ulysses app, which got added when I uploaded.

I’ve got to also mention Footnotes! They, too, are super simple to quickly and easily “type” in with your text and then upload upon export to WordPress – zero glitches. No fiddling to adjust later!

There’s only one part missing from WordPress export for me. I must use the WordPress app to add any hashtags or custom text to the “Share to Twitter” part. But that’s easy enough to do.

Ulysses also lets me export to PDF with ease, which is something I’ve wanted to do for a long time but found it too difficult due to the whole copy/paste text formatting problem. Markdown plus Ulysses’ magical export feature makes the work elementary.

I’ve been able to use all of Ulysses’ power exclusively on my iPad Air 2 and iPhone 7! It Syncs across them without any errors! The app relies on iCloud, which has gotten so much better over time. So whenever I happen to thumb-type texts on my iPhone or tap-out words on my iPad Bluetooth keyboard, all my writing is in unison.

The writing’s in the details

Ulysses can do a lot more than what I’ve highlighted here. For all its features and functions, the developer has somehow managed to make it seem so simple and clean in the interface, both in how it looks and also how it works. And that’s great design!

Because of the attention to detail and the care the developer has for the process of writing, I love Ulysses!

Finally, let’s talk about the behemoth in the writing nook: subscribing. Some apps, you can just pay a one-time fee for them and be done. I like that. Other apps, like Ulysses, require a subscription where you pay a small nominal fee each month or each year. There are pros and cons for this from both a user perspective and from the developer’s view.

I like Ulysses and am using it enough that I’m willing to subscribe to it. In fact, I did so today!

Moreover, I’m considering posting some of my writing to Medium in addition to WordPress. This prospect is all the more easy because I can write in Markdown, like I’m doing now, and export to both Medium and WordPress without any fuss!

I think Ulysses is a wonderful tool for writing. I love its focus, utility, and design. It’s robust and reliable. So I want to support the app and the developer, and I hope Ulysses continues to be the great tool it is long into the future.

I have many more words to write; Ulysses is the right tool.

What tool do you use for blogging or writing?
Topics: Computing