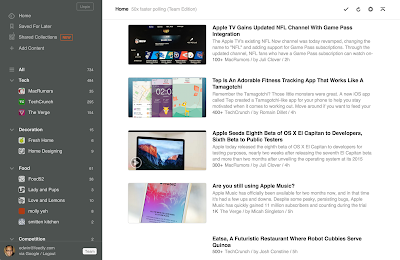 You know what it’s like to discover something new. But sometimes, it’s more interesting to rediscover something old so that it’s new again – like nostalgia being fulfilled, or an old friend who returns to take a new adventure with you.
Well, call me a nerd or a geek, whatever. This week I rediscovered an RSS reader. Feedly!

After Google Reader was shut down years ago, I looked for a replacement. That’s where Feedly came in, for a while. But at some point along the way of dabbling in different software, I kinda switched over to Pocket and other read-it-later services. Feedly fell by the wayside.
But this week, through my online reading, I was reminded of Feedly by way of a contrast. You see, there’s this little thing called Twitter.

But the big difference between Twitter and something like Feedly is that the former feed is algorithm based. So you don’t necessarily see every article from your fave news site. And you don’t see them in chronological order. It’s hit-or-miss.

The latter, though, shows you every article from every site that you want and in an order that follows the calendar! And it’s tailor made for easy viewing. You can scroll through all the sites you follow in a mixed feed, or you can “knock-out” everything per site in smaller and more manageable chunks. Best of all, you don’t miss anything!

There might be one drawback to using an RSS reader though. It is an aggregator. So you go to the reader to catch up on all the latest articles from your favorite online info-depots instead of going to the websites themselves. I don’t think that’s good for the site.

So I’m enjoying Feedly again. After installing it on my iPad, I decided I liked the web interface better. But the app is more useful on my iPhone.

When I logged in and saw some of my old sites still there, I wondered why I hadn’t been using Feedly all this time! Rediscovering it has been a nice bit of old being new again.

How do you keep up with your favorite websites?
Topics: Computing