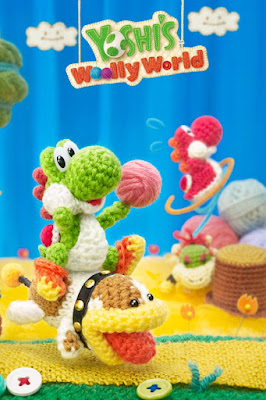 Superhero movies are the thing. You’ve seen them. Bombastic special effects depicting classic good vs. evil revolving around a central protagonist imbued with crazy powers and a complicated story-arc. Then there’s Yoshi. Have you heard of him?
Yesterday, my wife picked up Yoshi’s Woolly World for our Wii U – it was dirt cheap at GameStop. And wow, what a game!

My five sons watched as I started playing it last night (I had to pause Animal Crossing on my 2DS XL!). What cute fun! I never liked Yoshi more; it’s hard not to.

Wait, do you think my kids should be playing the game? They will. But I get to go first. We’ll do 2-player Yoshi runs also. Dad gets to be a big kid and relive his childhood with his own kids. There are perks to parenting.

Anyways, back to the main story. Yoshi, made out of yarn in this game, is a hero.

No, he’s not from Marvel. Not from DC. Not from a galaxy far, far away… He’s from Nintendo! Good wholesome family fun stuff.

Yoshi’s superpowers? Glad you asked. He can jump/float really high. He can eat things from far away. He can shoot yarn balls. But his greatest ability: adorability!

Superhero movies will enthrall you (the recent Aquaman, wow, amazing!). Yoshi’s Woolly World will put a huge smile on your face and make you happy.

Yoshi is out to save his little dino friends from the bad guy. The setting isn’t some distant cosmic space or high-tech starship. It’s like a fabric store and knitting craft room. Crochet and yarn are everywhere. It’s incredibly creative! (It is Nintendo after all.)

For this geek dad, my current superhero is Yoshi. Specifically, Yarn Yoshi. And this game has increased my love of Nintendo for instilling more fun and family time into our home.

Who is your favorite superhero?
Topics: Gaming