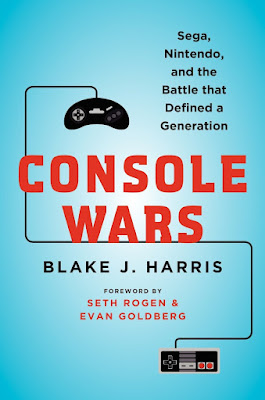 I just finished reading Console Wars by Blake Harris. It was Sega versus Nintendo all over again. I lived in that war in the 90’s. But now I’ve kind of relived it with more detail than ever.
I am a combatant, not a casualty, of the console wars. I was, and still am to this day, on the Nintendo side.

This long book, however, is written from Sega’s perspective as the underdog in the video gaming world, the David trying to take out the Goliath Nintendo.

All the players in the industry throughout the book are given their fair share of credit, or blame, for their success and contribution to the rise of video games after the fall of Atari in the 80’s.

So Console Wars is a balanced telling of the tales of fortune and misfortune for the leaders and game changers from Nintendo, Sega, and Sony, among others

It’s the story also of the real people behind Mario and Sonic. And if you’re someone who appreciates the art and technology of video games, you will likely enjoy this book.

My only gripes about the book are that there are a lot of corporate politics involved behind the scenes of the video games I grew up with. While interesting, the reading sometimes gets bogged down in the myriad of these kinds of details.

Also, the timeline of events throughout the book was a bit hard to follow here and there as the storytelling didn’t seem to follow a perfectly linear progression.

Minor gripes aside, I thoroughly enjoyed Console Wars and pretty much couldn’t put it down until “Game Over.”

On top of that, I honestly want more! I want to read a sequel that continues the saga of the video game industry up to today because there are new players and consoles, and there are more video game philosophies to play out!

Console Wars ended about the time the Nintendo 64 was on the horizon and the Sega Saturn faltered under the Sony PlayStation.

So missing is all that happens next: the hits of N64 and PS2, the entry of Microsoft and Xbox, the cultural phenomenon of the Wii, the success of Nintendo hand-helds, and the rise of smartphone and tablet gaming to name a few!

I was right in the middle of the rise of Nintendo in the 8-bit days and stayed with them through the Gamecube era.

It started for me when my friend got an NES (one that included R.O.B.) for his birthday. I was amazed; this Nintendo video game thing was so cool! It could play mario bros, the same one I played on an arcade cabinet in a convenience store as a kid! Later, another friend of mine got a NES. Again, I was pretty enthralled.

Years later, I had a Super NES, and my best friend had a Genesis. It was the early nineties. Grunge was in. My friend and I had friendly arguments about who was better and why: Sega Genesis or Super Nintendo? I recall the Sega commercials of the day (the “Sega!” scream) and a lot of the marketing that fueled video game rivalry.

It’s as if the video game industry players were playing a real live video game competition before the world. Each side had signature moves. Each era, 8-bit, 16-bit, and 32/64-bit, was one round in a 3-round fighting game! Mostly it was a 2-player duel between Sega and Nintendo, until Sony jumped in the fight.

As I grew older, got a job working in the corporate world, and started a family, I had less time and energy to play video games. Especially ones like Zelda and Final Fantasy that had hours of grinding or exploring.

After GameCube and GameBoy Advance SP, I totally missed the Wii revolution. Instead, in 2008, the iPod touch was my new techno toy as it started to become the newest hand-held game gizmo. I could more easily play casual games in it. And the cost of games was in a whole other ballpark compared to the Nintendo console games I once looked forward to. This led to a focus on tablet gaming in my household. The tablet’s simplicity was accessible to my young kids at the time.

But then in 2018, I got back in the game! My wife bought me a used Wii U for Father’s Day so I could play the newest breathtaking console Zelda game, Breath of the Wild. It is awesome! Next thing you know, my kids got into the 2DS.

My family finds that if you stay a generation behind in the video gaming world, you can save a ton of money buying used or refurbished consoles and games! It kind of brings things full-circle for me, because my first ever game console was an Atari 2600 purchased used in a garage sale. The cartridges I bought for it were 25 cents each!

The video gaming saga continues. The Wii U may have been a commercial failure for Nintendo, but then they return with their new hit Nintendo Switch.

Sony and Microsoft continue the tech-spec race for most realistic gaming graphics ever. Online and PC gaming or game streaming is alive and well. Who knows what the next level will be?

For me, Console Wars was nice nostalgia. I enjoyed learning how the video game industry influenced a sub-culture of gaming, which I was a part of in my youth. I had a Nintendo Power subscription from like 1988 until at least the late nineties!

If you like video games, I recommend the book. It’s a bit of good retro-edutainment. Pause your game, put down the controller, and pick up Console Wars.
Topics: Gaming, Reading